I’ll just talk about my experiences in this entry, I’ll make another post about how our technical projects have been going.

Last few days have been interesting. I’m writing this right now on Saturday evening (it’ll probably be posted later)-we don’t have Internet at Mike and Hill’s house. Tonse, the local WiMax ISP here has network issues right now. Last night they lost their upstream connection to the Internet. I could still VPN into Tidziwe, using the Tonse connection there. But right now, it looks like they are having problems inside their network too, my traceroute stops at the same point whether the traffic is going to the Internet or to Tidziwe (which is on a different tower from the one we use here).

We also can’t use our Zain cell phones at Mike and Hill’s house. We have a connection to the cell tower though, which makes me think that the cell tower we’re on has lost its connection to the rest of the Zain network. Adding and interesting twist however, my phone worked from the supermarket, but Mike’s Nexus One wouldn’t. Lot of strange connectivity issues going on right now.

I think we’re going to Lake Malawi tomorrow. We’ll probably leave in the morning and then return before dark. Once I got here I realized that I only have two real free weekends here in Malawi. This weekend, and the weekend after next. Next weekend I’ll be in Tanzania. So the weekend after next we might to Mozambique or Zambia or something. I’m hoping I’ll get to see one of the villages in the country at some point while I’m here. It’ll be interesting to compare that to the city. 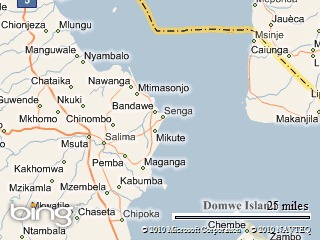 We went to Senga Bay

I’ll start from today. This afternoon we went to a supermarket store here, Chipiku. Then we went to the outdoor market here in Lilongwe. That was an interesting experience, there were tons of people selling fresh fruits and vegetables. A few people were also selling clothes, bootleg movies, etc. 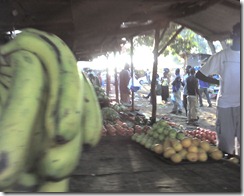 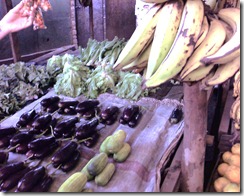 Here are some pictures as we were driving around today: 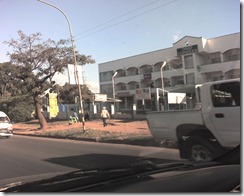 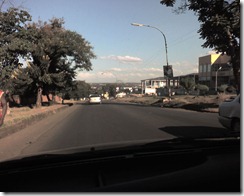 On Thursday and Friday, Michael and I ate at Tidziwe. A few ladies bring in food that they’ve made. It was interesting to try Malawian food. Much better than the Ethiopian food. Fries are called “chips” here (and potato chips are called crisps). The chips (fries) here are a little different than the ones in the US, they’re wetter and not as crispy. Glass bottles are most common here, though I’ve seen a few plastic bottles for coke and a few cans. 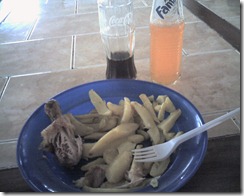 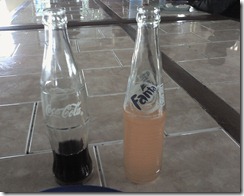 On Thursday I also had a burger from McDouds, a knock-off of McDonalds. The burger was OK, would have been much better without the mildly spicy sauce they put on it. We ordered from the table, and then they brought the food to us. It was about 900 kwacha’s for a burger and “chips”. A lot of places have pictures of the current Malawian President on the wall. Most of the paper currency has a picture of former President Kamuzu on it. The airport, and the central hospital are also named after him. Coins are pretty rare here, they have 20 kwacha bills, which are worth about a dime in US currency. I’ve only seen 10 kwacha coins. 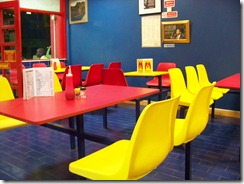 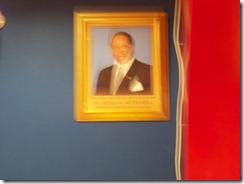