As promised here’s the second issue we ran in to when trying to resolve the first.

This ugly fix appeared to work pretty well at first. From where I’m located, I was able to get to the publically accessible services through both the primary and secondary connections. Unfortunately, some of the people located in Malawi weren’t so lucky. In fact, anyone that used Tonse (the provider of the secondary connection at Tidziwe) as their ISP in Malawi was unable to access the webmail and other services through the secondary connection. This at first didn’t make sense - if anything it would seem logical that accessing it from the same ISP would have fewer problems, not more.

Long story short, Tonse was dropping the response traffic as is entered their network, which is a reasonable thing to do given the circumstances. The packets said they were coming from an address inside of Tonse’s network (2.2.2.2 in our example below). Yet, how could this be given that the packet was coming from Tonse’s upstream provider? 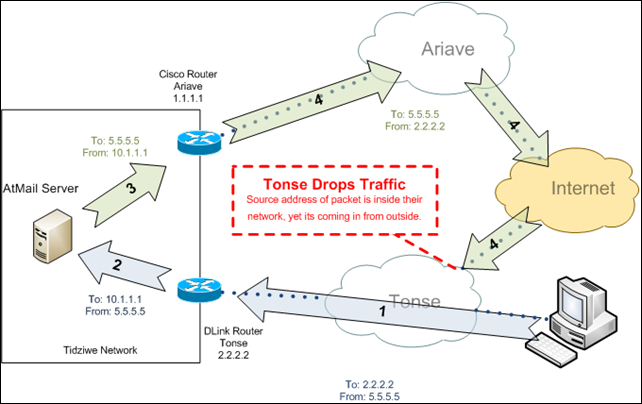 Unfortunately in the short term, we don’t have many options besides our current ugly hack. To get around this additional issue, I added a route map on the Cisco router (the default gateway). The route map routes outgoing traffic through the DLink if it is:

So far, no major problems with this. Hopefully we’ll be able to use both connections through a single device in the future, helping us avoid these sort of issues altogether.