I purchased a Ubiquiti Unifi AP earlier this week and have been pretty impressed.  The Unifi AP’s are super super cheap ($70 - 80), and the controller software is free.  The UAP Mini’s, which have a shorter range / slower speed cost about $60, though it’s hard to find anywhere online that has them available.  ( Amusingly, I can only just barely buy a Cisco PoE injector for this amount )  These are enterprise class AP’s - they support 802.1q, multiple SSID’s, WPA enterprise, centralized management, etc.  All of the current models are 2.4 ghz only, supposedly dual-band models will be released in the future.

They also support a captive portal, which is super easy to configure with either a static password, generated one-time-use vouchers, etc.  This is the only part that actually depends on the controller service.  So, if the controller is down (or inaccessible), everything will continue to work normally except guest access.  This is pretty nice, as it let’s you have a single controller for multiple sites, without having to worry too much about what happens if the sites are disconnected.  I have screenshots of the guest policy and voucher interfaces below. 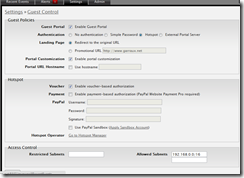 I do have a few small gripes / annoyances.  Hopefully some of these will be addressed as the controller software becomes more mature.  It looks like a long list - but I don’t think any of these would be deal-breakers in most small or medium sized environments.

There are some other things that would be nice to have, like:

I’ve heard of a UAP “Pro” mentioned on the Ubiquiti forums that will add a couple of these features (802.3af PoE, and gigabit interfaces).

Overall I love Unifi.  If your environment can live with these annoyances, frankly I don’t see any reason why you would use anything other than Unifi.

I’m excited to see where Ubiquiti will go in the future - they have some really great products.  Find more details on Unifi at Ubiquiti’s website.