This is a follow-up to my previous post.  In addition to getting some cool pens, I’ve also started to appreciate nicer paper more.

I’ve been somewhat conflicted regarding taking notes on paper.  I enjoy writing on real paper, but I have yet to reconcile that with my desire to store all of my notes in OneNote.  I’ve scanned some of my notes.but I don’t find scanned notes to be anywhere near as useful as my typed notes are. 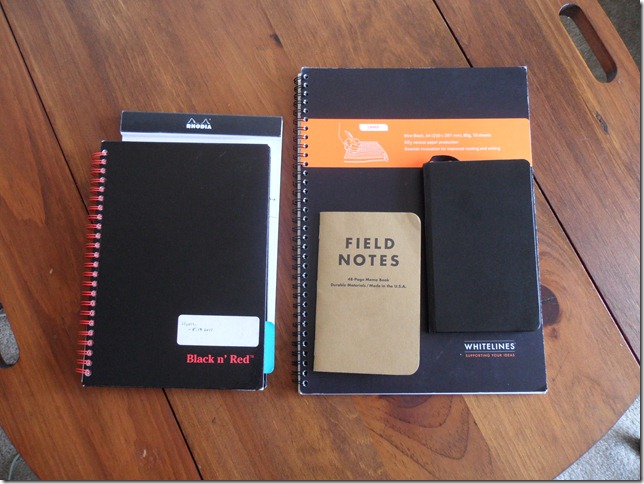 The company I work at had a few of these notebooks in their supply room.  I grabbed one someday last year when I needed some more paper to take notes on and was really impressed.  I’ve continued to use them at work and bought a few to use at home.

I think I had seen these in a store at one point and thought to myself “why would someone spend $7 or $8 on a small notebook like that”.  Ultimately I think it’s worth it - the paper is smooth and high-quality and the notebook itself is pretty solid with the hard cover.  The paper is thick enough that most pens I use don’t bleed through.some have occasionally though.  My Retro 51 Tornado shows through a little more than I would like, as does my Pilot Varsity fountain pen (medium nib).  Most everything else is OK though.  I’ve found I like paper with more subtle lines (instead of bolder lines that contrast more with the paper).the light gray lines in the Black n' Red notebooks are great.

I find these pretty good for taking notes in meetings and for projects.  I like that it opens completely flat, and I can take notes on my lap if needed because of the hard cover.  I have a larger A4 Black n' Red notebook that I’m planning on using when I finish up my Whitelines A4 notebook.

This isn’t really a notebook, but more of a notepad.  The paper is probably the best I’ve ever used.  It’s great for pens that write a little thicker.  It’s extremely rare that I can see any ink show through at all.

I do like the “dots” that this paper has as opposed to lines or squares.  They provide enough guidance to keep things in a line, but not distracting.  I use this mostly for semi-daily to-do lists.  The notepad doesn’t feel like the best form factor to takes notes in meetings for me, I like having things in a notebook so I can (hopefully) find my notes easier in the future.

At some point I’ll probably have to try some of Rhodia’s other notebooks.

The Whitelines notebooks are a little different.  Instead of having darker lines on white paper, they have (as their name implies) white lines on gray paper.  This makes it easier to scan, which was appealing to me.  I use this mostly to take notes as I’m reading IT related books, watching some of the pretty interesting videos posted from NANOG and RIPE conferences, etc.  I’ve scanned a lot of my notes from this notebook, and they do scan well (as long as you scan it in black in white).

It’s a little “rougher” feeling than the Rhodia or Black n Red paper.  It’s still pretty thick though.  Bleed-through hasn’t been much of a problem for me.

I bought a packet of three Field Notes notebook recently (one with lines, another with graph style paper, and the third with no lines at all).  Their paper is quite a bit thinner feeling than the other ones I’ve mentioned above.  Bleed-through is more of a problem.  Fountain pens or liquid ink pens that write thicker haven’t worked as well on this paper.  The paper is pretty smooth, and it light brown lines that are pretty eye-friendly.

I haven’t figured out exactly what I will use these for.  They are about the same size as the Leuchtturm pocket notebook below, but they have soft covers and are fairly thin.  I’ve carried one in my pocket alongside my Leuchtturm notebook before and it worked OK, but I’m not sure if these are durable enough to carry everyday in my pocket.

The paper isn’t real thick, so some pens have bled through a bit.  The ink from a ballpoint pen I’ve used on it has ended up rubbing off a little bit on the opposing page when I shut the notebook.  It hasn’t done this on any other paper, so I’m not sure why it’s working differently on this paper.  I don’t think those are huge problems though.it’s ultimately a pretty good notebook to carry around with me.  I have been carrying this notebook in my pocket to write down thoughts or epiphanies that I have.  This notebook has a hard cover and a elastic band to keep it shut.

So that’s it from me.  Does anyone have any other pens or paper they particularly like using?  Or thoughts on how to balance taking paper notes with electronic ones?