Over the last year or so, I’ve been trying some different pens and paper.  I discovered JetPens last summer, and have probably spent more money than I should have there :)

I wanted to post a few details about some of the pens and notebooks that I’ve enjoyed using lately.  I’ll put some of my favorite pens in this post, and then make another post later about the paper.

I wrote a few notes about the pens below going in order from left to right. 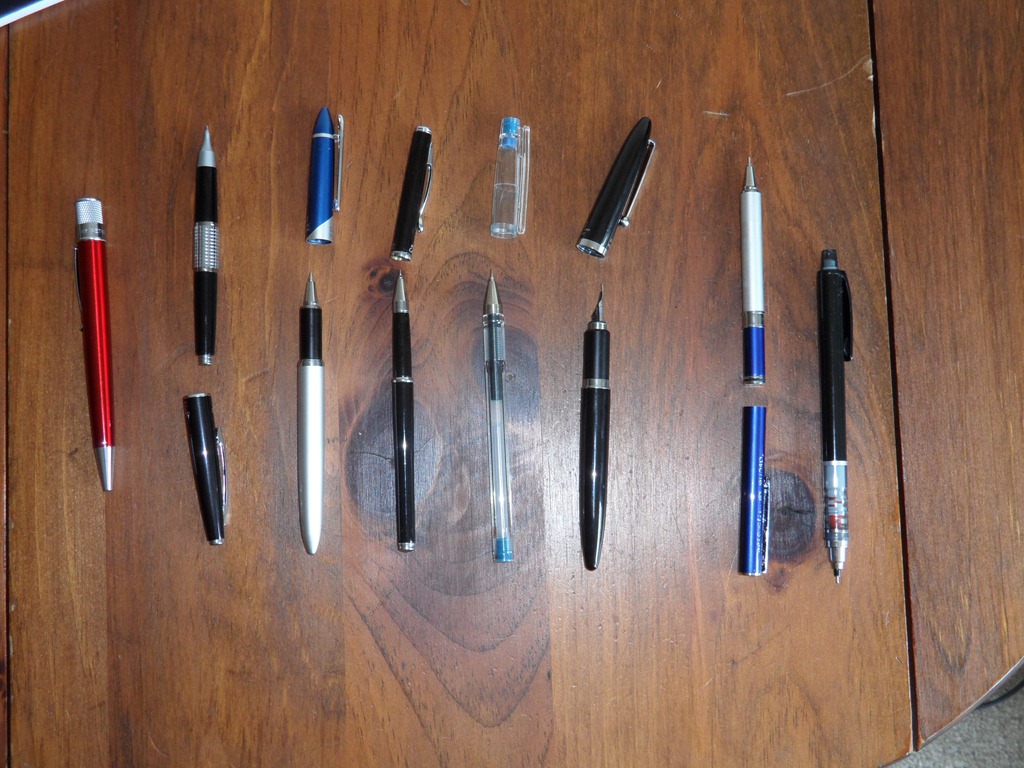 I really like the look of this pen.  It writes pretty smoothly as well.  It does bleed through a bit on some of the thinner papers I use.  It writes a bit thicker than my preference would be, but it’s a pretty good pen overall.

In general, I haven’t been a big pencil user.  I had read some pretty good reviews about this mechanical pencil though.  Apparently this specific model has been available since the 70’s.  I really like it though - it writes pretty smoothly, especially on nicer paper like the Black n Red notebooks.  It also has a pretty nice look to it - how many mechanical pencils do you know of that have a cap?  The pencil lead doesn’t really smear at all that I’ve noticed - even on smoother paper.

This came with a ceramic 0.5 mm liquid ink refill.  At first it wrote really nice and smooth.  After a few months though, it started skipping a fair amount, which was kind of disappointing given how much I liked the pen.  So, I recently bought a few additional refills for this pen - I am trying another 0.5 mm ceramic refill, as well as a 0.7 mm ceramic refill and a 0.7 mm gel ink refill.  So far the 0.5 mm ceramic refill is working sort of OK.  It was hard to get it to write at all at first - it took maybe half an hour.  I’ve been using it for a couple weeks, and I’m starting to see an occasional skip, so I’m a little worried that I’ll have issues again.  I haven’t used the 0.7 mm refills much yet, so maybe those are more reliable.  Overall this is a nice feeling pen, but I’m not so sure about Ohto’s 0.5 mm refills.

This is definitely one of my favorites.  JetPens was originally out of them when I found it on their site, I picked one up when they had them back in stock several months ago.  Unfortunately, it looks like it’s out of stock again.  The Pilot Hi-Tec-C pens are well thought of, and write really smoothly. I love the feel of this pen though - it’s relatively small and thin to hold, but it has a nice solid weight to it. It feels solid and looks really nice.

When I bought this, I think I saw conflicting information as to whether the Pilot “G-Tec” pens were actually different than the Hi-Tec-C ones, or if it was just a different branding.  I can’t really tell a difference between this one and other Hi-Tec-C pens I have.  It writes smoothly, and has a nice blue color.  The plastic in the cap has cracked some in the year or so I’ve had it.  The cap still works fine, it just doesn’t look as nice with the cracks running through it.

I tried my first fountain pen several months ago.  It was a cheaper disposable one.  It wrote smoothly, but it had a medium nib on it.  It showed through more than I liked on a lot of the paper I used, even somewhat thicker paper like the Black n read notebook has.  So, I wanted to try a nicer fountain pen with a fine nib.  I’ve been using this for maybe a couple weeks now and really like it.  It is “scratchier” than the pen with the medium nib, but that hasn’t been a problem at all for me.  It performs much better on thinner paper than the disposable fountain pen did.  I’m definitely glad I picked this one up.  It is a fairly large pen, it’s pretty comfortable to hold and write with.  So far, I’ve just been using the ink cartridges that came with it.  I might try out some different inks at some point.

This is a oil based ballpoint pen, not a gel or liquid ink pen like most of the others I’ve been using.  That being said - it writes better than almost any other ballpoint pen that I’ve used.  It writes smoothly and has a pretty thin, solid, and consistent line compared with most ballpoint pens.

It’s small enough to easily fit in a pocket.  The part of the pen you hold fits almost all the way into the cap.  And the cap securely posts to the top of the pen to make it more comfortable to write with.  I carry this pen along with me most places I go.  The only major issue I’ve had with the Ohto Tasche is on the paper in a small Leuchtturm notebook I recently bought to carry around in my pocket.  The ink seems to smear a bit in the notebook, even after waiting for a minute or so after writing.  I’ve seen a couple places where it looks like a few small points of the ink have ended up on the opposing page after I closed the notebook.  I haven’t seen these issues on other paper though.

The Kuru Toga has an interesting feature for a mechanical pencil. To keep it from forming a chisel tip on the pencil lead when you write with it (which would result in a thicker, less precise line), the lead actually rotates around when you write with it.  It mostly works for me.though it’s not perfect.  Sometimes it does seem like I end up with a chisel tip on the lead, it could just be the way I write though doesn’t trigger the lead rotation as much as it should.

On some smoother papers, like in the Black n red notebooks, the pencil lead seems to smear slightly on the page when my hand goes over it.  This isn’t a huge deal though.