Hey, it’s been a while since I’ve blogged about pens. I’ve gotten a number of new pens since I last posted, figured I should do an update. 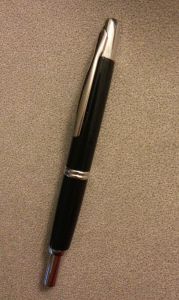 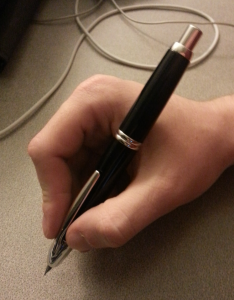 Earlier this year I bought a Pilot Vanishing Point, at WorldLux pens while I was out in Seattle. One of my concerns about the Vanishing Point was whether the placement of the clip would bother me. I planned to stop by WorldLux to try one out in person before buying it. It didn’t really bother me. If anything, it kind of helps align my fingers properly (sort of like the angled grip on the Lamy Safari does).

This was the first “high end” fountain pen I had used. The softness and the flexibility of the nib really surprised me, it has a very comfortable feel when writing with it. It has a nice solid weight to it as well, which I find enjoyable.

Mine has a medium nib. At first I used mostly fine nibs when I started getting in to fountain pens. I have been trending more towards medium nibs as of late. Perhaps because I’ve found better paper that bleeds / feathers less with larger nibs.

As much as I like it, I don’t plan on spending this much on a pen again for a long time.

I got my Pilot Prera as a gift around a year ago. They come in a nice variety of colors. They also make clear (“demonstrator”) Prera’s, but personally I’m not really in to that. I think my gray Prera looks pretty sharp.

The nibs on Japanese pens like the Prera tend to be smaller than the same size of pens made elsewhere. My “fine” Prera writes much smaller than my “extra-fine” Lamy Safari. This is part of what I love about the Prera - it puts down a very thin line, but despite that it’s not scratchy or inconsistent.

The only thing I don’t like about the Prera is how light it is. I think pens feel a little more “grand” when they have a bit more weight to them. Still, the Prera is definitely one of my favorite pens. 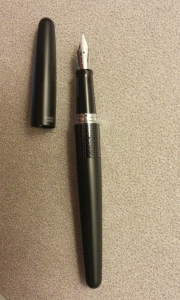 Earlier this year I started hearing a lot of great things a new fountain pen from Pilot - the Metropolitan. For a relatively inexpensive entry-level fountain pen, the Metropolitan is fantastic. It has a nice solid weight and feel to it (not at all cheap and plastic-y), writes smoothly, and looks nice. If I had seen a Metropolitan in person before seeing the price, I would have probably guessed it would cost at least $40 to $50. JetPens is selling them for $14.50. I believe that it’s only available with a medium nib.

The only bad thing about the Metropolitan earlier this year was how hard it was to find any place that had them in stock. I don’t think that’s a problem now though. If you’re interested in trying a fountain pen, go buy the Metropolitan now :) I believe they come a converter (to use bottled inks), as well as a Pilot ink cartridge.  Goulet Pens also has a package with a Leuchtturm notebook, a Pilto Metropolitan, and a bottle of ink which could be great for someone just getting started with fountain pens. 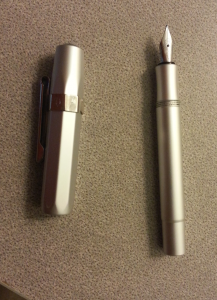 I was out in San Francisco over the summer, and stopped by Flax Art and Design. I had seen someone post on a fountain pen related site about it, but I was kind of skeptical about how much they would actually have in the way of fountain pens based on their name.  Wow! That place was awesome - they ended up having lots of fountain pens and paper, and were very friendly and willing to let me try out several different fountain pens.

I was torn between the Kaweco Liliput and Kaweco AL Sport. Both were quite a bit smaller than I expected, but wrote well and had a nice feel to them. I ended up going with the AL Sport. The nib isn’t as soft and flexible as the Vanishing Point, but it is very very smooth. It’s small enough (and well built enough) for me to carry in my pocket. I ended up buying a clip for it as well. It doesn’t come with one - I learned from one of the nice folks at Flax that this style of Kaweco was originally intended to be carried in a small pocket on a vest, in the early 1900’s.

The biggest downside for me is that there is only a squeeze style converter available for it, because of it small size. I have never found these to work nearly as well as twist converters. I never seem to be able to get very much ink into a squeeze style converter. On the plus side, it does take standard international short ink cartridges. I find it annoying that my Pilot pens don’t.

Paper wise, I’ve also gotten a few different types of paper and notebooks as well over the last year or so. Here are a couple that stand out to me - 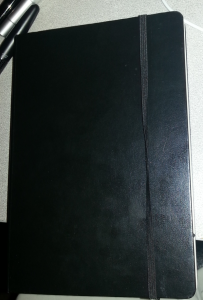 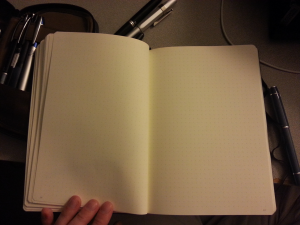 I’ve become a fan of Leuchtturm since I started using their pocket size notebook last year. Their notebooks come with a lot of pages, their paper has a nice cream color, and I like the little extras like page numbers and a table of contents. I use a hardcover medium Leuchtturm notebook for my everyday miscellaneous personal notes. I really like their dot grid paper as well. Their paper is a little thin - some thicker fountain pens show through to the back side of the page. I’ve never had it bleed through though. 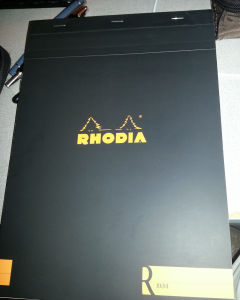 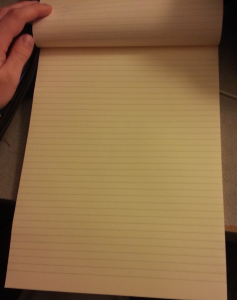 I bought a full size Rhodia R pad earlier this year. Rhodia paper isn’t cheap but it is fantastic quality. The paper is fairly thick, and it also has a nice off-white color.

I also have a Rhodia Webnotebook that I have not used yet. I think I’ll try it after I finish out my Leuchtturm notebook. Because their paper has a kind of slick surface, some fountain pens take a while to dry when writing on it. This hasn’t been much of a problem though.