IPSec VPN’s are the de-facto standard for connecting multiple sites together over the Internet. Unfortunately, interoperability between multiple vendor’s IPSec implementations can be “fun”. IPSec leaves many options to individual implementations, so it can be somewhat configuration heavy. And multiple vendors don’t necessarily use the same terminology, configuration structures, or defaults, further complicating things.

There are a couple common different modes of operation for site to site VPN’s - policy based and route based. Coming from a network background, I prefer to look at site-to-site tunnels as just another L3 interface that the router routes over (meaning, route-based tunnels). In this scenario, which traffic is sent over the tunnel is controlled simply by routing. Many vendors' implementations are designed primarily for “policy-based” site-to-site VPN’s. Policy-based VPN’s typically select traffic with an access list that is applied to the physical interface (rather than the VPN tunnel being a separate interface). To me, this seems kludgy and less flexible. So, where possible, I prefer to use route-based tunnels, ideally with dynamic routing. 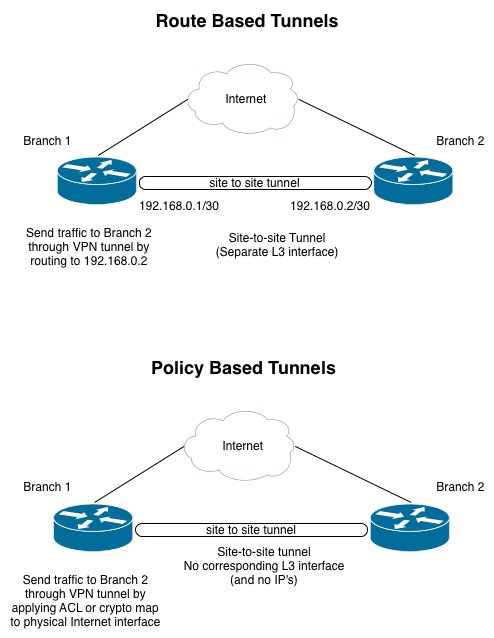 IPSec in Vyatta appears to be primarily intended for policy-based tunnels.  But, if the VPN endpoints also support a common cleartext tunneling protocol (like GRE), you can create a route-based VPN by running GRE over a policy-based IPSec tunnel.  I used a Juniper SRX 210 and a Ubiquiti EdgeRouter Lite in this scenario.  Ubiquiti’s EdgeRouter series of products run their EdgeOS software, which is based on Vyatta.

On the JunOS device, the IPSec VPN tunnel is configured between the Internet facing interface (ge-0/0/0.0), and the Internet IP on the EdgeOS device (192.168.39.14). It is a route-based tunnel that attaches to the st0.2 interface. The st0.2 interface must be a part of a security zone. If it is not configured to be part of a security zone, you will see a somewhat misleading sounding error message stating that no proposal was chosen.  Juniper has a KB article on this.

One other important thing to note is the proxy-identity configuration. This must always match between the IPSec endpoints (with the local / remote IP’s flipped). JunOS makes this easy in that it gives you the option of explicitly configuring the proxy-identity values. Many other implementations make implicit assumptions about what these values should be, based on what traffic you have selected for tunneling when using a policy-based tunnel. The proxy identity values themselves have no control over what traffic is routed through the tunnel. But many implementations set their proxy identity value based on that. Mis-matching proxy-identities are a fairly common problem when doing IPSec between different vendors. In this case, I am using the IP’s on the IPSec tunnel (192.168.41.9 / 192.168.41.10).  I had to use these IP addresses, because the EdgeOS device automatically sets the proxy-identities on its side to match the networks that are routed through the tunnel.

On the EdgeOS device, the IPSec tunnel is configured between the local Internet address and the Internet address of the JunOS peer.  The EdgeOS device uses a policy-based tunnel.  It selects traffic for the tunnel based on the local and remote subnets configured on the tunnel itself.  These options both select traffic for the tunnel, and set the proxy-identities for the IPSec association.

The EdgeOS router doesn’t have an IPSec interface configured like the JunOS router does (st0.2). However, I have configured a loopback address (192.168.41.10 / 32) that overlaps with the subnet used on the IPSec tunnel interface on the SRX. This is needed so that we have an IP address to terminate the GRE tunnel that is sent through the IPSec tunnel. Using the /32 address on the loopback will work fine here - we don’t actually want to pull traffic for the remote router into the loopback interface. That traffic will match the policy configured for the VPN, so we don’t have to do anything specific to handle routing to 192.168.41.9.  We need a /30 on the JunOS side though (192.168.41.9 / 30 ), because in that case we **do **want to pull traffic in to that interface, since it is an IPSec tunnel interface. There is no policy on the SRX that selects traffic for the tunnel (it relies on routing).