Along with more “pure” Layer 2 - 4 data center networking, I also work a lot at application level with apps that we load balance and provide services for. One of those services is single sign on using F5 APM. We have recently started doing proof of concepts with the SAML functionality on the F5 APM.

I have a lab F5 virtual edition at home, and I tried out the SAML SP and IDP functionality on it to familiarize myself last weekend. In this post, I will run through how I set this up at a high level. I’m not an expert on SAML, and don’t claim that this is a perfect SAML deployment, but it’s a fairly simple way to get started. The specific scenario I labbed out here isn’t necessarily a realistic one…while you might have a single APM act both as a SAML IDP and SP, you would likely be using partners / service providers as well. It’s easy to set up a small SAML lab though with just an APM since it can serve as both components. I assume you have a basic understanding of F5 APM concepts.

SAML (Security Assertion Markup Language) is a mechanism for separating authentication from the application that needs to know the user’s identity.  It allows one party (called the IDP or Identity Provider) to authenticate a user and provide them with a SAML assertion (a signed token). The user proves their identity to the other party (called the SP or Service Provider) by sending them the SAML assertion. This all happens over HTTP.

You might think of it as a “web based Kerberos”. The user authenticates to an IDP instead of a KDC, and instead of being given a Kerberos ticket, they have a SAML assertion.

The SAML process can be kicked off by the user accessing either the SP or the IDP. If the user access the SP, they will be redirected to the IDP, where they will authenticate, and be redirected back to the SP, with a SAML token.  Here’s a quick picture of what the traffic flow looks like in an SP initiated SAML session.  Note, that while the SP and IDP are both configured on the same F5 APM in this instance, they act independently and only communicate with each other through the HTTP requests from the user. 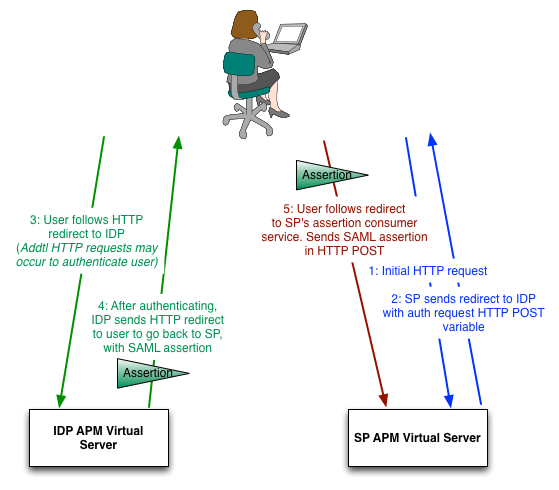 Here’s an overview of the IDP configuration objects on the APM: 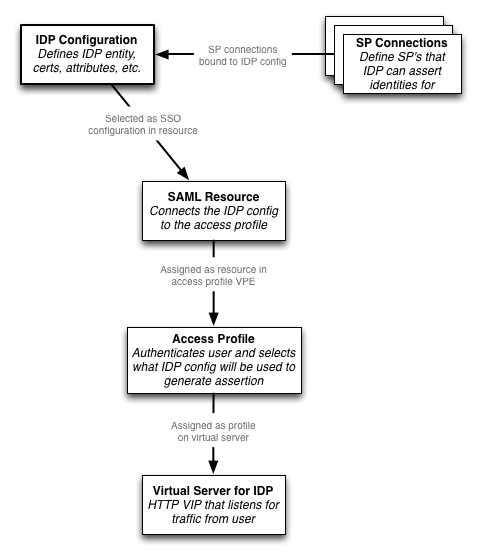 Here’s what the SP configuration on the APM looks like at a high level: 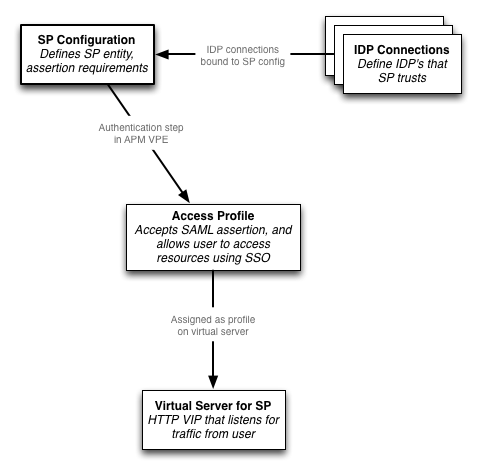 On the security tab, you probably will want the SP to require a signed assertion from the IDP.

Note - I did also make HTTP basic SSO work with SAML, by encoding an encrypted version of the password as an attribute in the SAML assertion.  That gets sent as part of the assertion from the IDP to the SP.  The SP decrypts the attribute, and can use it during the SSO credential mapping step.  This isn’t something that would typically be done though, you wouldn’t want to send the password to an external service provider that you are federating with.

Connecting the IDP and SP

You’re not quite done yet.  You’ve configured both the IDP and the SP, but they don’t know about each other yet.  You’ll need to do this by creating connections and binding them to the IDP / SP configuration objects.  This may feel a little redundant in this situation, but typically your IDP / SP will be federated with external providers.  For example, your IDP might provide identities to Microsoft Office 365.  This is where you would tell the IDP on your APM about the Office 365 SP.

Once I started working with it, SAML seems a lot simpler than I initially was expecting it to be.  If you already have APM, and are wanting a quick way to start using SAML for some applications, you should definitely take a look at the SAML functionality built in to APM.  It was added in 11.3 and support has been expanded in 11.4.